(Playable in all regions of the world)

Life of Padre Pio
Including the Ceremony of the Dedication
of the New Basilica of St. Pio of Pietrelcina
The Second Largest Basilica in Italy - Only St. Peter's is Bigger
A JPN Production
by award winning British film director J. Paddy Nolan

Fr. Anthony McDowell
For me he was a 'no-nonsense' man,
with two feet firmly on the ground,
a priest of the people

Stella Lilley
I think its growing now.
People are turning more to Padre Pio then ever before.

Maria Scott
Following her blessing with the Padre Pio relic, and recovery
from a serious illness, she could only say,
"Thank you Santo Pio, thank you"

Fr. Billy Keogh
He is the priesthood redeemer and restored,
a priest in the likeness of Christ, an outstanding
role model for our times, who we can follow.

No. 11 of
Seeing is Believing
A Video Series

(As seen on EWTN of Mother Angelica)

Dear Brothers and Sisters, 1. It is a great joy for me to meet you again the day after the solemn canonization of the humble Capuchin of San Giovanni Rotondo. Dear pilgrims and devotees, I greet you with affection who have gathered in Rome in such large numbers for this special occasion. I first of all greet the bishops, priests and religious who are present here. I want to pay special attention to the Capuchin Franciscans who in communion with the whole Church praise and thank the Lord for the marvels he has worked in their exemplary confrere. Padre Pio is an authentic model of spirituality and humanity, two characteristic features of the Franciscan and Capuchin tradition. I greet the members of the "Padre Pio Prayer Groups" and the representatives of the family of the "Home for the Relief of Suffering", that great institution for the treatment and the care of the sick that came forth from the new saint's charity. I embrace you, dear pilgrims from the noble land that gave birth to Padre Pio, from the other regions of Italy and from every part of the world. By your presence here, you witness to how widespread are devotion to and confidence in the holy Friar of the Gargano in the Church and on every continent. 2. But what is the secret of such great admiration and love for this new saint? He is first of all a "friar of the people", a traditional characteristic of the Capuchins. He is also a saint who is a miraculous healer, as the extraordinary events which are part of his life attest. However, above all Padre Pio is a religious who is deeply in love with the crucified Christ. He even shared physically in the mystery of the Cross during his life. He liked to link the glory of Tabor with the mystery of the Passion, as we read in one of his letters: "Before exclaiming with St Peter "Oh how good it is to be here', it is necessary first to climb Calvary, where one sees only death, nails, thorns, suffering, extraordinary shadows, abandonment and fainting" (Epistolario III, p. 287). Padre Pio made his journey of demanding spiritual ascesis in communion with the Church. The temporary misunderstandings he had with one or other ecclesial authority did not put a brake on his attitude of filial obedience. Padre Pio was a faithful and courageous son of the Church and in this situation following the shining example of the "Poverello" of Assisi. 3. May this holy Capuchin to whom so many people turn to from every corner of the earth point out to us the means to reach holiness which is the goal of our life as Christians. How many faithful in every social condition, from the most diverse places and the most difficult situations hurried to ask his help! He knew how to offer them all what they needed most, which they were often groping for without being fully aware of it. He passed on to them the comforting and enlightening Word of God, enabling each person to draw from the sources of his grace through his diligent dedication to the ministry of the confessional and the fervent celebration of the Eucharist. So it was that he wrote to one of his spiritual daughters: "Do not be afraid to come to the Lord's altar to be fed with fleshoftheImmaculateLamb,because no one will better reconcile your spirit than your king, nothing will warm it more than his sun, and nothing will soothe it better than his balm" (ibid., p. 944). 4. The Mass of Padre Pio! It was an eloquent reminder to priests of the beauty of the priestly vocation. For the religious and the lay people who flocked to San Giovanni Rotondo even at the early morning hours, it was an extraordinary catechesis on the value and importance of the Eucharistic sacrifice. Holy Mass was the heart and the source of his whole spirituality: "There is in the Mass", he used to say, "the whole of Calvary". The faithful who crowded round his altar were profoundly impressed by the intensity of his "immersion" in the Mystery, and perceived that "the Father" participated in his person in the Redeemer's sufferings. 5. St Pio of Pietrelcina presented himself to everyone - priests, men and women religious and lay people - as a credible witness to Christ and to his Gospel. May his example and intercession spur everyone to greater love for God and concrete solidarity with his neighbour, especially those who are in greatest need. May the Blessed Virgin Mary, whom Padre Pio called by the beautiful name of "Our Lady of Grace" (Santa Maria delle Grazie), help us to follow in the footprints of this religious who is so beloved by the people! With this hope, I cordially bless you who are present here, your loved ones and all who are committed to following in the spiritual footsteps of the beloved saint of Pietrelcina.

Wendy and Paddy Nolan with Mother Angelica founder of EWTN

as shown on EWTN of Mother Angelica 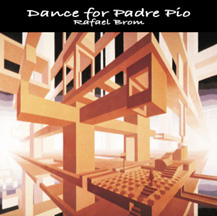 Other Videos and Books on Padre Pio

Videos and Books on Sr Faustina and Divine Mercy

THE BOOK OF DESTINY By Fr. H.B. Kramer
CATHOLIC PROPHECY THE COMING CHASTISEMENT AND THE LAST DAYS By Yves Dupont
FORTY DREAMS OF ST. JOHN BOSCO By St. John Bosco
HISTORY OF ANTICHRIST By Fr. P. Huchede
LIFE OF ANNE CATHERINE EMMERICH By V. Rev. C. E. Schmoeger, C.SS.R.
THE PROPHECIES OF ST. MALACHY
PROPHECY FOR TODAY By Edward Connor (compiler)
THE PROPHETS AND OUR TIMES By Fr. R. Gerald Culleton
THE REIGN OF ANTICHRIST By Fr. R. Gerald Culleton
Divine Mercy and Sr. Faustina (Videos and Books)
Padre Pio (Videos)
Medjugorje - The Queen of Peace - Gospa (Videos, DVDs, Books and Audio CDs)
Catholic Prophecy: Full Text of the Prophecy of the Third Secret of Fatima
The Kingdom of the Bride

BIBLES
From Vatican: Text of The Third Secret of Fatima - Complete Text
Books and Videos on Padre Pio
Videos and Books on Sr. Faustina and Divine Mercy plus Diary of Sr. Faustina
ROMAN CATHOLIC BIBLES - Family Bibles, Spanish Bibles, Church, School and Catholic Study Bible Edidions
Bishop Fulton Sheen - Audio CDs, Videos and Books
THE DOUAY-RHEIMS BIBLE - Now in Larger Print!
Why Should You Read Only the Douay-Rheims Translation of the Bible?