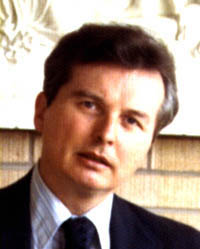 Libor Brom was professor of Foreign Languages and Literatures and director of Russian Area Studies at the University of Denver.
He is the author of nine books and a great deal of studies in the field of Slavic culture and civilization.
In addition, he has lectured at numerous institutions of learning and before many civic and religious groups on education, literature, and international relations. He has appeared on three continents and often on radio and television.
A native Czechoslovakian, Dr. Brom was an American citizen. He received his education at the Czechoslovak Institute of Technology, School of Economics, the Charles University of Prague, School of law, the San Francisco State University, and the University of Colorado.
In Europe, Dr. Brom served as an economist and lawyer in International Business and as the chief planner in the research. development, and normalization of Czechoslovak river shipbuilding.
As a professor in the United States, he was selected by the Modern Language Association of America as the Teacher with Superlative Performance, named The American by Choice in Colorado, and received a National Americanism Medal.
In the College Book by the Ballantine Books of New York, 1984 he is named Denver University's best professor.
Dr. Brom served in the leadership of many national and international organizations and was imprisoned by both the Nazis and the Communists. He is listed in Who'S Who in America and Who's Who in the World.

The fact is that we live in a time of fateful challenges. As a people and a nation we are under test.
This challenge is, of course, Marxism-Leninism. There is no mystery in its strategies and tactics. It has always been concrete and spelled out in black and white. It has also been openly and actively tested in the economic, political, and ideological struggle for control around globe.
Lenin, the founder of the first Communist state, put it simply: "First we will take Eastern Europe, then the masses of Asia. We will encircle the last bastion of capitalism, the United States of America. We will not need to fight. It will fall as a ripe fruit into our hands." And, "We must practice coexistence with other nations, until we are strong enough to take over by means of world revolution.... We are not pacifists. Conflict is inevitable. Great political questions can be solved only through violence.... It is inconceivable that Communism and capitalism can exist side by side. Inevitably one must perish.''

Rykov, Lenin's successor in the Council of Soviet Commissars, corroborated: "It is our duty to inculcate in the minds of nations the theories of international friendship, pacifism, and disarmament, encouraging their resistance to military appropriations and training, without ever relaxing our own efforts in building our military equipment.''
Manuilsky, a prominent Soviet professor at the School of Political Warfare, said: "The bourgeoisie will have to be put to sleep. We shall begin by Launching the most spectacular peace movement on record. There will be electrifying overtures and unheard-of concessions. The capitalist countries, stupid and decadent, will rejoice to cooperate in their own destruction. They will leap at another chance to be friends."

And Khrushchev, a more contemporary Soviet prime minister, said: "We cannot expect Americans to jump from capitalism to Communism, but we can assist their elected leaders in giving Americans doses of socialism until they suddenly awake to find out they have Communism.''

Today, Marxism-Leninism represents a most complex and powerful doctrine developed by Communist theoreticians and practitioners in every corner of the world. 'Its universal library offers dynamic political weapons and comprehensive theories, diversified approaches and seductive slogans. On one side of the globe, there is the Yugoslav moderate theory of reformed Communism and participative economy which lures masses into socialism. On the other side of the earth there are Chinese slogans which are more productive in inflaming a Communist revolution.

Marxism-Leninism is particularly effective on the semantic level where it exhibits a devastating duality. It lulls its adversaries to sleep, while at the same time it mobilizes its followers to revolutionary action. The Communist International's Seventh Congress concluded that open use of revolutionary terminology does not promote the Marxist-Leninist drive for world domination. Therefore, "revolution" has been changed into "liberation," "world conquest by the proletariat" has been changed into "peace and socialism," "armed seizure of power and liquidation of the bourgeoisie" has been rephrased to read "peaceful and gradual transition to socialism.''

Even the word "Communism," which every revolutionary is so proud of, has been changed into "progressive, "anti-Fascist" or "liberal." Further, to confuse their adversaries, the Marxist-Leninists have devised a new language which uses old words in the basic vocabulary. When they say "imperialism arouses the wrath of the people and digs its own grave," they mean "through our manipulation of the local Communist parties, and with a vast auxiliary corps of dupes ; and sympathizers, we so arrange matters that the free enterprise system and democracy are destroyed from within. All we need to do is push it into the grave."

Thus, the free, complacent, conscience-stricken, guilt-ridden, sex-sodden, drug-driven, decadent, and often antagonistic societies have been manipulated by goal-oriented, dedicated, and shrewd Marxist-Leninist dialectics into a notorious period of so-called peaceful coexistence and plain overt hostilities. "Detente" has become not the hope of free people everywhere, but rather their doom. "Detente does not necessarily spell out the end of the struggle between the two social systems," says Pravda. "The struggle will continue between the proletariat and the bourgeoisie."
In other words, the so-called detente is nothing more than a form of Marxist-Leninist art skillfully geared toward pacifying the American public by encouraging them to act ridiculously nice while the Communists kick the daylights out of them. The result is that the free world continues to shrink. Democracies cannot handle periods of low-tension confrontation. They have - an almost universal desire to believe that peace is the natural condition of man, that armies are temporary nuisances, that conflicts of interest can be dissolved simply by a policy of good will. Unfortunately, nothing is further from the truth; but for some reason free people prefer to believe it.

From "Where is Your America" by Libor Brom
Reprinted by permission from Imprimis, the monthly journal of Hillsdale College. August 1982, Vol. '', No. 8.
“Reprinted by permission from Imprimis, a publication of Hillsdale College.” SUBSCRIPTION FREE UPON REQUEST. ISSN 0277-8432. Imprimis trademark registered in U.S. Patent and Trade Office #1563325.

LIBOR BROM, emeritus professor of Russian studies and Eastern European expert at the University of Denver, served as president of the World Representation of Czechoslovak Exiles and chairman of the Czech World Union.

The current events in Czechoslovakia known as the velvet revolution are identified as such because the Communists are handled there with velvet gloves.

This gang of rude, spiteful, lazy, cunning criminals seizing power over a state, fanatically persisting for 41 years in breaking down families, confiscating properties, spilling blood, destroying the nation's wealth, spoiling environment, brainwashing generations of their countrymen, then retreating from their crimes as if nothing had happened and coming out of it without any judgment and punishment.

And that's not all!
Imagine this! Another clan of the same gang, a bunch of chronic opportunists, hypocritic exploiters, crafty pretenders, arrogant scoundrels, national outcasts and international adventuters joining the revolution and continuing their bloodsucking as if no evil had ever been done.

And this is not all!
Imagine this - these moral, mental and spiritual degenerates not repentant of their evil past, but proudly persisting on their paty affiliation and in free elections voting again for the old criminal party.

And that's not all!
Imagine this! Now these comrades trying to actively sell the idea that to blame for their crimes are whose who were persecuted, expropriated, deported, jailed, tortured and killed; those who for decades were denied food, shelter, education and the hope for a normal life; those whose thousand-year Christian culture was ravaged and their God blasphemed.

Vaclav Havel has resurrected president Thomas G. Masaryk's Christian principle "Jesus, not Ceasar!" Czechs and Slovaks who have survived the forty-one years Communist inferno have no problem with this statement, but first the Communists, present or past, must be removed from all leadership positions!

After all, didn't all tyrants meet justice after the Nazi holocaust?

1. Havel's collaboration with the communists was such that, unlike genuine opponents of the former regime, he was able to travel abroad between imprisonments.
When Czechoslovakia was under merciless communist oppression, Havel even participated in a procommunist demonstration while in New York.

2. Havel's ongoing association with communists allowed him material advantages, Western recognition, an opportunity to build a political organization and a reputation as an anti-communist crusader.

3. Havel's alliance with communists in 1989 culminated in an agreement to start communist political reforms, to preserve communist interests and to stage the communist "Velvet Revolution" in Prague. Later it was the communist parliament that unanimously elected Havel president.

4. Havel's first ambassador to the United States was a fanatic Stalinist during Czechoslovakia's darkest days of communist tyranny -- the 1940s,'50s and '60s.

5. Havel's first minister of foreign affairs was a dedicated communist during the Stalinist rule in Czechoslovakia, a Western-based correspondent who supplied communist media with propaganda material. As foreign minister, he publicly displayed his disdain for Czech and Slovak exiles.

6. Havel's first minister of finance, later prime minister, held - the Communist Party line against exiles, compared them in a speech with Bolsheviks, and denied them the restitution for their confiscated property.

7. Havel's first parliament chairman, a Moscow-trained communist and subsequently general secretary of the Czechoslovak Communist Party, after the Soviet invasion was active in the communist diplomatic service abroad and returned to communist-dominated Czechoslovakia to continue his lifelong service in the party. After the "Velvet Revolution" he became head of the Committee for a New Czechoslovak Constitution that never materialized.

8. Havel's ambassador to Canada, a stalwart communist, was a member of the Central Committee of the Slovak Communist Party.

9. Havel's consistent protection of his communist cronies has kept them immune from indictment and punishment for even the worst atrocities that were committed, and has made it possible for them to launder funds stolen under the old regime. This has enabled communists to become legal owners of new "privatized" enterprises.

10. Havel's insistence that all Czech people share a "collective guilt" for the communist rule has in effect absolved the communists of any responsibility for their crimes. It also has aroused political skepticism in the population devastated by a half-century of Nazi and communist occupation.

11. Havel's reliance on old domestic structures and foreign secret societies, his avoidance of popular presidential elections and of personal contacts with anti-totalitarian national forces abroad, his inability to prevent the breakup of his constituency into more than 60 confusing political parties has caused the ultimate disintegration of the Czech Republic.

12. Havel's reluctance to identify himself with the 1,000-year-old -Czech spiritual heritage has isolated him from the anti-communist national core.

These are reasons why the great majority of Czechs in exile find Havel's character lacking and his incompetence intolerable, and believe he has proven himself unworthy to lead a free Czech Republic. 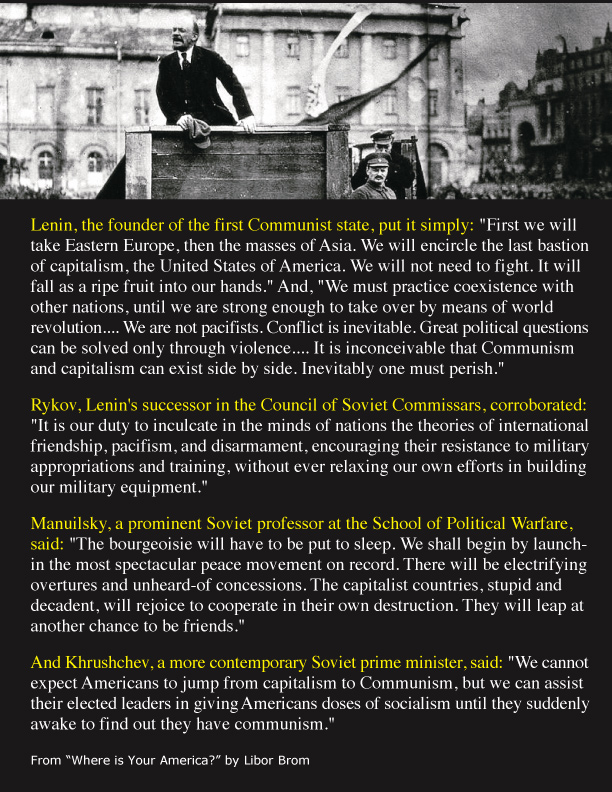 The World on Fire

The Woodlands Conference on Capital Preservation

Where is Your America?

The Soviet Union and the Czechoslovak Army, 1948-1983: Uncertain Allegiance
By Condoleezza Rice

Extraordinary, Ordinary People: A Memoir of Family
By Condoleezza Rice